What a pun project. Chefs Bob Harre and Wolfgang Geckeler came to Mascot Books wanting to publish a cookbook. In addition to designing their book, they wanted to task us with designing a logo to represent their brand. Bob and Wolfgang were focused on the Souper Chefs Cookbook as their immediate venture. But had plans in the future to open a Souper Chefs restaurant as well. Keeping this dream in mind, they wanted to establish a logo for Souper Chefs while we worked on the book.

I had made the suggestion to Bob and Wolfgang that although they were initially focused with the cookbook cover design, we should start out with establishing the logo design. This would act as a catalyst for any and all visuals established for the culinary duo.

Our team had a few discussions with Bob and Wolfgang regarding their expectations for the project. One thing that we all agreed on, is that the logo should appear soft and comfortable. This was a challenge for me right off the bat. I had just wrapped up a few projects that were very loud and vibrant in terms of design. And this project would prove to be a complete 180 from those qualities.

I researched some brands that had similar qualities to what Bob and Wolfgang were going for. After I had sketched and built out some ideas, we came to this solution you see pictured. We arrived at a simple soup bowl icon with rounded edges and lines. Similarly, we chose a typeface for the Souper Chefs wordmark that has rounded curves where a lot of other fonts would have sharp corners. These qualities helped make the logo appear more comforting and approachable, and Bob and Wolfgang were ecstatic about it.

The logo design would first serve as the title text for Bob and Wolfgang's cookbook. And it did so with a high level of efficiency. It would match the vibe of the professional photos that the authors were using, and implied all of the qualities that Bob and Wolfgang wanted readers to get from their book. 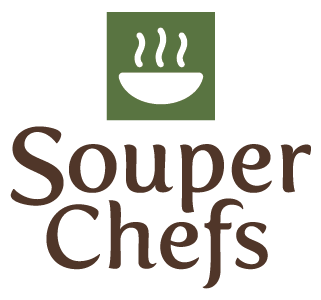